Nagisa Shiota (Japanese: 潮田 渚 Shiota Nagisa) is a student of Kunugigaoka Junior High School and the main protagonist and narrator of the anime and manga series Assassination Classroom. In the anime series, he is mainly portrayed by Mai Fuchigami (in the original) and Lindsay Seidel (in the English dub).

Nagisa is a short male with a thin frame. Notably, he has blue eyes and shoulder-length light blue hair, which he keeps in two pigtails thanks to fellow classmate Kaede Kayano. Overall, Nagisa's appearance is quite androgynous, which is often poked fun at by others, most notably Rio Nakamura. Humorously, his androgynous appearance was once used to disguise Nagisa as a female.

Supported by his meek appearance, Nagisa is calm and generally friendly to those he meets. He has an exceptional observation ability, and is often deeply aware of situations around him. When heavily focused on a subject, such as Korosensei, he will often take short notes and is quite organized in their presentation. However his calm demeanour is a façade, as Nagisa hides deep insecurities about himself. Among these, he heavily doubts his talents and often undermines the judgment of those around him; as reflected by a pessimism about himself and his future. 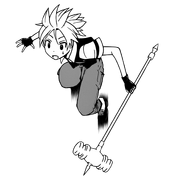 Add a photo to this gallery
Retrieved from "https://videogames-fanon.fandom.com/wiki/Nagisa_Shiota?oldid=91221"
Community content is available under CC-BY-SA unless otherwise noted.